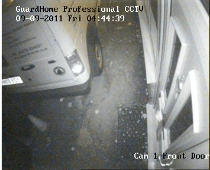 In part one of this short series we explored how infra-red cameras can enhance black and white  images during periods of low light at night. In this second part we shall discuss infra red illuminators.

In situations where there is no natural or other artificial visible light present, a camera, like our eyes, will not be able to capture any sort of image. In these circumstances infra red illuminators can be used to provide “invisible” illumination. Technically infra-red is outside of the human visible spectrum, although there is a slight overlap and often infra-red illuminators provide a soft red glow when viewed directly, they do not produce a visible beam, like a torch. The infra red radiation is reflected off objects within it’s field of view, which is captured by the electronic detectors in the camera and converted into a visible black and white images. The amount of light reflected is proportional to the heat (and colour) of the object it strikes, so warm objects, like humans, reflect more infra-red than colder objects around them.

Infra-red illuminators in the form of light emitting diodes (led’s) are often incorporated into a camera assembly to provide a convenient “all in one” package.

The image below is taken with one of these cameras. 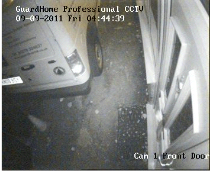 In this particular application the infra-red is reflected off the various white surfaces and as a result produces a very good evenly illuminated image.

However, the next image demonstrates one of the major drawbacks of infra red illuminators. 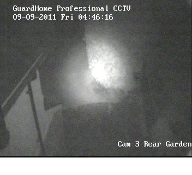 Their “light” dispersion tends be quite narrow, like a focussed light beam of a torch, compared to the light given off from a light bulb. Note how the image shows a narrow circle of brighter objects directly in front of the camera and much darker objects outside of this area. When used in confined spaces, nearer objects receive and reflect more infra-red than

more distant objects, so it tends to give very high contrast images, with nearer object washed out and distant objects quite dark. One final drawback is that spiders often make their webs across the warm lens of an infra-red camera and they reflect all of the infra-red from their bodies and virtually obliterate all other objects in the field of view of the camera.

So the selection of the right camera for the lighting conditions DAY and NIGHT is critical to 24 hour security surveillance.

In our next part we will discuss an alternative to infra-red illumination.